In our work entitled “Adversarial Unsupervised Domain Adaptation for Acoustic Scene Classification”, we present the first approach of domain adaptation for acoustic scene classification. To do so, we use one dataset recorded from a device (domain), device A, and data recorded from two other devices/domains, the B and C. All data are publicly available at the website of DCASE 2018, Task 1 (subtask B). Our approach is inspired by the Adversarial Discriminative Domain Adaptation (ADDA) and is adapted to the acoustic scene classification task.

Next, when we have obtained a good model MS, we clone it and we create another model, the MT. We use the model MT with the data from devices B and C, which we group them and call them target domain (that is the “T” in the MT) data. In contrast, the data from device A is the source domain (that is the “S” in the MS) data. The target is to bring as close as possible the MS(XS) and MT(XT), in other words, to make the learned latent representations that are used for the classification (from C) of the data from the two domains (source and target) to have as similar distributions as possible.

Below you can see our results in the form of confusion matrices. Each row shows how many of the recordings of the acoustic scene indicated at left, are classified as recordings from the acoustic scenes indicated above the matrix. The numbers are normalized to [0, 1] and the higher the better. The first confusion matrix shows the results when we use MS(XT), i.e. the non adapted model, and the second when we use MT(XT), i.e. the adapted model. 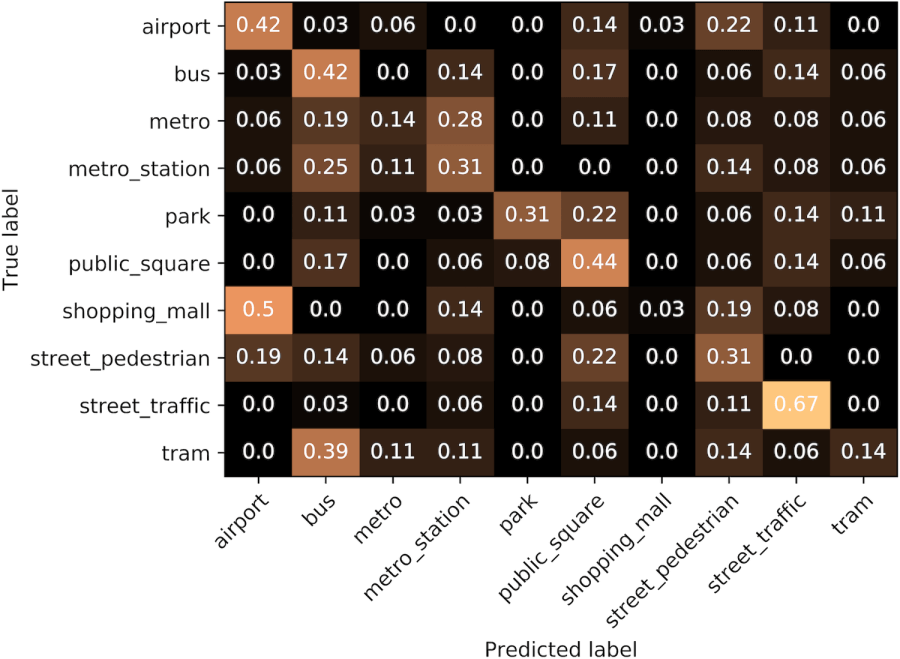